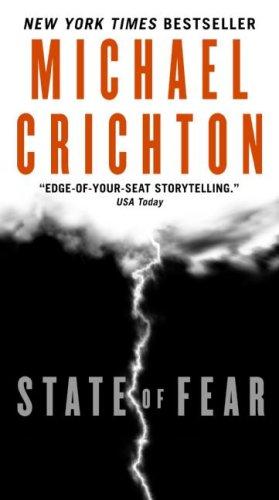 A Michael Crichton Timeline
Amazon.com reveals a few facts about the "father of the techno-thriller."

1960: Crichton graduates from Roslyn High School on Long Island, New York, with high marks and a reputation as a star basketball player. He decides to attend Harvard University to study English. During his studies, he rankles under his writing professors' criticism. As an act of rebellion, Crichton submits an essay by George Orwell as his own. The professor doesn’t catch the plagiarism and gives Orwell a B-. This experience convinces Crichton to change his field of study to anthropology.

1969: Crichton graduates from Harvard Medical school and is accepted as a post-doctoral fellow at the Salk Institute for Biological Science in La Jolla, Calif. However, his career in medicine is waylaid by the publication of the first novel under his own name, __. The novel, about an apocalyptic plague, climbs high on bestseller lists and is later made into a

1972: Crichton's second novel under his own name __, is published. Also, two of Crichton's previous works under his pen names, Dealing and A Case of Need are made into movies. After watching the filming, Crichton decides to try his hand at directing. He will eventually direct seven films including the 1973 science-fiction hit __, which was the first film ever to use computer-generated effects.

1980: Crichton draws on his anthropology background and fascination with new technology to create __, a best-selling novel about a search for industrial diamonds and a new race of gorillas. The novel, patterned after the adventure writings of H. Ryder Haggard, updates the genre with the inclusion of high-tech gadgets that, although may seem quaint 20 years later, serve to set Crichton's work apart and he begins to cement his reputation as "the father of the techno-thriller."

1990: After the 1980s, which saw the publication of the underwater adventure (1987) and an invitation to become a visiting writer at the Massachusetts Institute of Technology (1988), Crichton begins the new decade with a bang via the publication of his most popular novel, . The book is a powerful example of Crichton's use of science and technology as the bedrock for his work. Heady discussion of genetic engineering, chaos theory, and paleontology run throughout the tightly-wound thriller that strands a crew of scientists on an island populated by cloned dinosaurs run amok. The novel inspires the 1993

1995: Crichton resurrects an idea from his medical school days to create the Emmy-Award Winning television series __. In this year, ER won eight Emmys and Crichton received an award from the Producers Guild of America in the category of outstanding multi-episodic series. Set in an insanely busy an often dangerous Chicago emergency room, the fast-paced drama is defined by Crichton's now trademark use of technical expertise and insider jargon. The year also saw the publication of __ returning readers to the dinosaur-infested island.

2000: In recognition for Crichton's contribution in popularizing paleontology, a dinosaur discovered in southern China is named after him. "Crichton's ankylosaur" is a small, armored plant-eating dinosaur that dates to the early Jurassic Period, about 180 million years ago. "For a person like me, this is much better than an Academy Award," Crichton said of the honor.

Q: What book has had the most significant impact on your life?
A: __ by Alice Miller

Q: You are stranded on a desert island with only one book, one CD, and one DVD--what are they?
A: __ by Lao Tzu (Witter Bynner version)
__ by Johannes Brahms (Georg Solti)
__ by Akira Kurosawa

Q: What is the worst lie you've ever told?
A: Surely you're joking.

Q: Describe the perfect writing environment.
A: Small room. Shades down. No daylight. No disturbances. Macintosh with a big screen. Plenty of coffee. Quiet.

Q: If you could write your own epitaph, what would it say?
A: I don't want an epitaph. If forced, I would say "Why Are You Here? Go Live Your Life."

Q: Who is the one person living or dead that you would like to have dinner with?
A: Benjamin Franklin

Q: If you could have one superpower what would it be?
A: Invisibility

For his latest foray, Crichton alters his usual formula--three parts thrills and spills to one part hard science--to a less appetizing concoction that is half anti-global warming screed and half adventure yarn. This adds a mission impossible element to Wilson's narration: how to make pages of research interesting enough to hold the listener's attention until hero and heroine face their next peril. Unfortunately, Wilson approaches the statistical information like a newscaster communicating via Teleprompter. This earns him an A-plus for elocution and timbre, but a more average grade when it comes to dramatic interpretation. Consequently, the scientific material that Crichton spent three years researching seems even more copious in audio format than in print. And it's certainly much harder to flip past. Wilson is more successful in handling conversational passages, employing accents and adding subtle touches to various voices--a cynical tone for the hero, who's a mildly hedonistic corporate lawyer, and an edgier, less patient attitude for the beautiful, ready-for-anything heroine. As they hot-foot it around the globe, assisting an Indiana Jones-like MIT professor in thwarting evils perpetrated by a mass-murdering environmentalist, Wilson stirs up a little suspense by speaking faster and more energetically. But the book's abundance of statistics would slow any narrator's momentum, and Wilson is no exception.
Copyright © Reed Business Information, a division of Reed Elsevier Inc. All rights reserved.